How Long Do Drugs Remain in Your System?

Home - Addiction Resources in Washington State - How Long Do Drugs Remain in Your System?

People often have to take drug tests for legal or medical reasons. For example, employers may require that you pass a drug test before starting a job. Courts may order a drug test if you’re involved in a custody case. If you have to take a drug test for any reason, you might wonder, “How long do drugs stay in your system?” You may have stopped using a substance a few days or weeks ago, but will your drug test be clear? The more serious question may be in regards to your long-term goals regarding substance use: are you planning to end substance use completely?

How Long Drugs Stay In Your System Varies

You might think that once the effects of the drug have worn off, a toxicity screening won’t detect the substance. However, it takes some time for the body to metabolize drugs and eliminate them from your system. Even if you don’t feel high, you might still fail a drug test.

Before we discuss the specifics for various drugs, it is important to note that your metabolism, any existing medical conditions, and history of substance use can affect how long drugs remain in the body. The most significant factors that influence how long drugs stay in your system include:

Even your sex can affect how long substances remain in your system. Females and males process substances differently due to differences in body weight, length, surface area, cellular water levels, and hormones.

Drugs and Their Half-Lives

Every drug has a specific half-life. The half-life refers to the time it takes for the kidneys and liver to process and eliminate half of the amount of the substance that is in your bloodstream. A drug with a longer half-life will take more time to leave your system.

But different types of drug tests can pick up substances in the system for varying amounts of time. We will address that in each section below.

Most drug tests pick up substances from the following:

Many substances show up in your urine for longer than they do in your blood or saliva. That can tell the person who is analyzing the drug screening a great deal about your usage. If a substance shows up in a saliva test shortly after a workplace accident, it’s more likely that you used the drug shortly before the accident. A hair test taken at the same time can reveal that you used the substance within the past 90 days, which doesn’t help analysts determine whether the drug use was associated with the accident.

How Long Does Heroin Stay In Your System?

Heroin is a Schedule I controlled substance. It is addictive and has no approved medical benefits. The substance delivers a quick, euphoric high, which is followed by intense relaxation, contentment, and drowsiness.

The average half-life of heroin is approximately 30 minutes. This means that within half an hour of taking it, your body will have eliminated 50% of the substance from the bloodstream. Although heroin leaves the system quickly, it creates metabolites that can stick around longer.

The window of detection for heroin in toxicology screenings is as follows:

How Long Does Marijuana Stay In Your System? 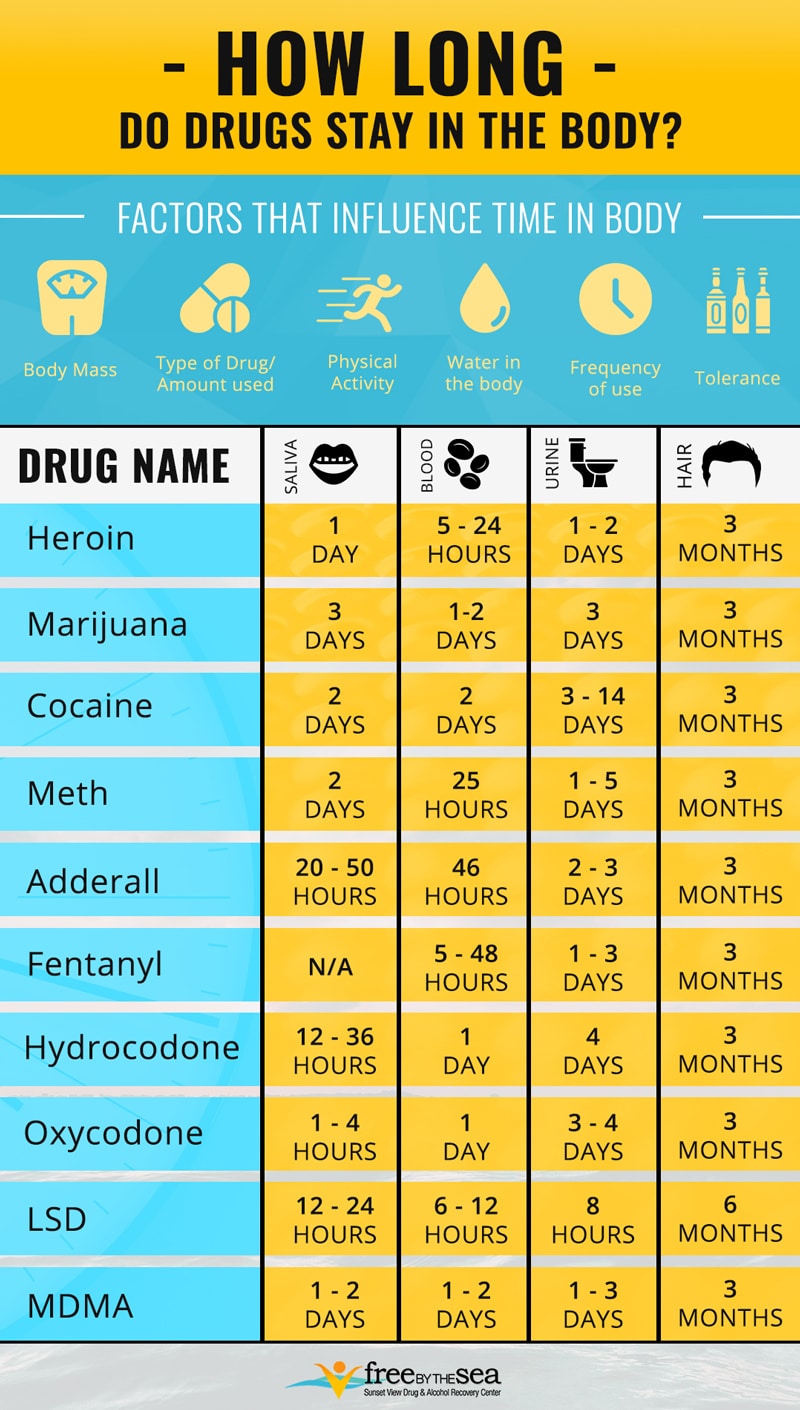 Marijuana is a substance that comes from the cannabis family of plants. It contains many cannabinoids, including THC, a psychoactive compound that can affect your thinking and overall perception. Some types of cannabis, such as hemp, contain many cannabinoids but are low in THC.

A drug test will screen for THC metabolites in the system. If you’re using a type of cannabis with low or no THC, it shouldn’t show up on a drug test. If you regularly consume marijuana edibles, the drug may stay in your system longer than it would if you smoked it.

The window of detection for marijuana in toxicology screenings is as follows:

How Long Does Cocaine Stay In Your System?

Cocaine is a stimulant that elevates your mood, heart rate, and respiration. Its effects come on quickly, depending on the method of consumption. When you snort cocaine, you’ll feel the effects within three to five minutes. Smoking or injecting the drug produces effects within seconds. Benzoylecgonine, a cocaine metabolite, is stored in fatty tissue. Therefore, drug tests may pick it up for a longer period of time in people with higher levels of body fat.

The window of detection for cocaine in toxicology screenings is as follows:

How Long Does Meth Stay In Your System?

Methamphetamine, often referred to as ice or crystal meth, is a stimulant with a rapid onset. The initial rush lasts for about 30 minutes, and the high that follows can last for several hours. The average half-life for meth is about four to five hours. Your body excretes some meth without metabolizing it at all. But tests can detect chemicals that your body produces as it breaks down the remaining meth.

The window of detection for meth in toxicology screenings is as follows:

How Long Does Adderall Stay In Your System?

Adderall is a prescription medication that can help people with attention-deficit hyperactivity disorder organize their thoughts. The substance can help people who have ADHD and similar conditions feel calmer and less chaotic. If you don’t have one of these conditions, however, you may get an energetic high from Adderall. Whether or not you have a prescription, you can put yourself in danger by taking too much Adderall or using it without medical supervision.

The window of detection for Adderall in toxicology screenings is as follows:

How Long Does Fentanyl Stay In Your System

Fentanyl is a synthetic opioid that is up to 100 times more potent than morphine. Because it is so potent, fentanyl can be extremely dangerous. Although the drug is available with a prescription, most cases of harm and deaths associated with fentanyl are associated with illegal versions of the drug. This substance is especially dangerous when you combine it with other drugs.

The window of detection for fentanyl in toxicology screenings is as follows:

Please note that saliva tests do not consistently pick up fentanyl or its metabolites. Therefore, analysts commonly use urine, blood, and hair tests to detect how long fentanyl stays in your system.

How Long Does Hydrocodone Stay In Your System? 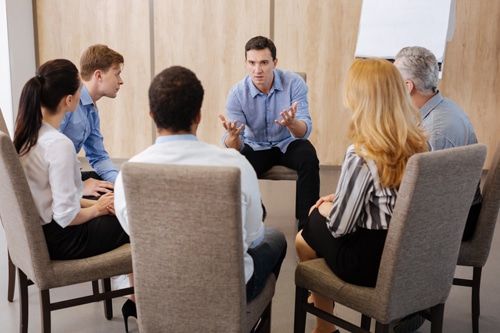 Hydrocodone is a prescription opioid that is used to treat pain in people who don’t find relief from other medications. Hydrocodone works in a similar manner as heroin, working with opiate receptors to block the sensation of pain. Some brands combine hydrocodone with acetaminophen or ibuprofen to provide additional pain relief and reduce inflammation.

This medication is usually taken orally and can take some time to produce effects. The average half-life of the drug is about 4 hours. If you take the drug for pain, you might stop feeling the therapeutic effects hours before the drug is fully eliminated from the body.

However, the substance can show up in a drug test for the following amounts of time:

Codeine, while similar to hydrocodone, has different drug detection times. How long does codeine stay in your system?

How Long Does Oxycodone Stay In Your System?

Oxycodone is an opioid that is prescribed for various types of pain. In addition to relieving physical discomfort, the drug produces drowsiness, relaxation, and euphoric feelings. If you misuse or take oxycodone in high doses, it can produce fatal side effects. This drug is also highly addictive. You should not take it for an extended period of time.

When it’s taken orally, oxycodone takes about an hour to begin producing effects. Some people abuse the drug by snorting or injecting it. Those methods of administration can produce an almost immediate high. The immediate-release version of the drug has a half-life of about 3.2 hours. Extended-release formulas can have a half-life of up to 5.6 hours.

Although the drug should clear the bloodstream within 24 hours, drug tests can detect it as follows:

How Long Does LSD Stay In Your System?

Lysergic acid diethylamide is the official name of the drug that most people know as LSD. This drug is usually taken orally. It is absorbed by your mucous membranes, and the psychoactive high kicks in within about 20 to 90 minutes. For most people, the effects of LSD, which may include hallucinations and euphoria, peak within 2 to 3 hours. However, the “trip” can last for up to 15 hours.

The average half-life of LSD is about 5.1 hours. Even after the substance is no longer detectable in your bodily fluids, however, its metabolite can show up in urine tests for up to five days.

This is how long LSD is detectable in drug tests:

How Long Does MDMA Stay In Your System?

MDMA is the scientific term for a drug that is sometimes called Molly or ecstasy. This drug produces euphoria and enhances your ability to perceive sensations. Pure MDMA is usually available in crystal form. However, ecstasy is often created as a pill that may be cut with other drugs. MDMA’s half-life is about 8 hours. It is fully eliminated from the body within 40 hours. Although its metabolites remain for longer, they’re not identified in conventional drug tests.

MDMA is detectable in drug tests for the following time ranges:

Can You Eliminate Drugs From Your System Faster?

If you’re hoping to pass a drug screening but you’ve used a substance recently, you might wonder if you can do anything to rid the chemical from your body quickly. In general, there is not much you can do to boost your body’s metabolism of a drug. Your liver and kidney function are largely responsible for processing chemicals, and you can’t change the health of your organs quickly enough to make a difference.

The best way to eliminate drugs in your system is to stop taking them. The drug detection times listed above are based on the last dose. As more time passes, the drug is less likely to show up in a toxicity panel.

Let Free By the Sea Help You Today

It can be difficult to quit certain drugs, especially if you are struggling with addiction or facing uncomfortable withdrawal symptoms. We can help you by offering specialized support and professional medical management. We understand that a chemical dependency is tough to break, and we provide customized, well-rounded treatment options to help you get on the road to recovery. If you or a loved one are struggling with substance abuse, contact us to find out how we can help.